Hello Blackwell Studios :) I just purchased the three-game hardcopy bundle + Umbra: Stations. I can’t wait for my hard copies to get here! Your games have been on my radar for a long time. I already printed out my copy of Stations and hand bound it! (See photos) I have never bound a book before, so that was a fun thing to learn!

But I can’t use this game until my hardcopy of Umbra core gets here. :( Would it be possible for you to share a copy of the PDF with me? Regards, Kris! 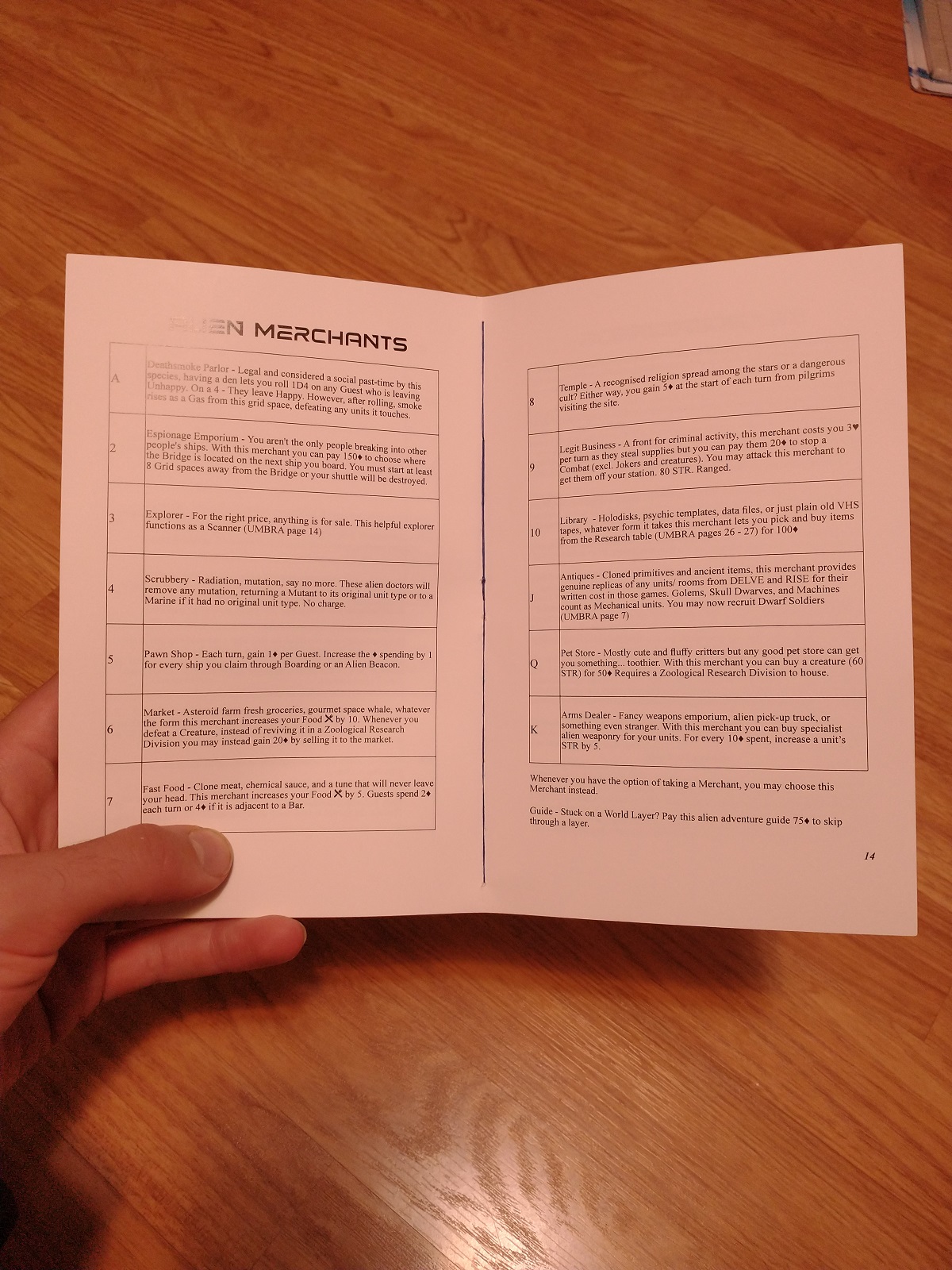 Hey Sustrato, that's awesome and you've done a good job of the binding. I'm trying to learn how to do it myself but just can't find the time.

Hi! What kind of playing cards do I need?

Any standard playing card deck that still has the Jokers.

After DELVE and RISE, I've dug into UMBRA, and I can now see: this one is awesome. It's clear that of the three, this game recieved the most attention, it's much more polished, organized, and balanced than the others.

While I prefer the fantasy genre of DELVE, this game was probably the best of the three, with the most control given to the player despite the randomness of being based around a deck of cards.

But, since I've been taking notes, I still did find a few little glitches - mostly with the very beginning of the game.

- starting a game says starts with 25 STR of marines, but unlike DELVE or RISE it doesn't clarify this is 5 marines.
- Units starve if you don't have enough food. You also start with 5 units and 0 food.
- I know STATIONS is coming, but it's weird to have the main game refer to an expansion that isn't released yet.
- Unlike DELVE or RISE, there doesn't appear to be a cap on your resources or funding. It would be nice to call that out.

My final observation for this game is - it also feels like it's the easiest of the three by far, given that the basic Marine is Ranged, and the medbay and scanner are relatively accessible. Range is so important, because every unit's STR is basically tripled, because you can hit them from two squares away. Once you're a established a bit, combined with medbays, you just say "STR lower than 150? I win without damage." Not that I mind the game is easy, but the game becomes so easy as to discard whole portions of it.

Once again, great game! I really have enjoyed it. :)

Oh, I did find two typos too. I wrote them down somewhere else:

- In the Info Table [Q] entry, it says to consult the research table, but then lists the page number for the Info Table. You know, the one you're looking at.
- The legendary find: shield generator, says it creates a level 3 shield, but shields are only created as STR bonus from defense droids. Is it meant to be a defensive barrier?