RISE: A Game of Spreading Evil is the evil sister of DELVE: A Solo Map Drawing Game.

RISE: A Game of Spreading Evil is a map drawing game that puts you in control of a monstrous dungeon as you seek to reach the surface and take over their puny kingdoms. As long as you can keep your mutinous minions under control that is.

This 41 page zine has everything you need to generate natural formations, forgotten ruins, enemies, magics, artefacts, and heroes. It has a simple turn-based combat system, rules for building your dungeon and optional challenges for a harder experience.

Inspired by games like Dwarf Fortress and Dungeon Keeper, RISE aims to capture that feeling of building and ruling a dungeon, dealing with mutinous minions, and proving that you are the One True Evil.

All you need to play is, a pencil, paper (preferably 1" grid), and a deck of playing cards.

Having awoken a thousand years after an embarassing defeat, you must build your dungeon from scratch, whip these mewling minions into line, and take the surface once and for all!

Each round your minions will mine another square of the grid, you draw a card from your deck of playing cards and see what they found. Hearts ♥ and Diamonds ♦ are resources and trade goods that you'll use for building and hiring units while Clubs ♣ and Spades ♠ are natural formations and forgotten ruins. From dwarven outposts to mysterious portals, these subterranean locales will become part of your dungeon's unique layout and may provide unexpected benefits. Or you might just unleash a horde of pixies in which case, you'll need to fight.

Combat in RISE is designed to allow for forward planning and strategic thinking without weighing you down with book-keeping. Enemies follow a tower-defense style path towards your Dungeon Heart while you move your units in simple turn-based tactical combat. Utilise traps, ranged attacks, and special units to face deadly foes or chronicle the collapse of your dungeon for use in a story or RPG.

RISE will also be supported with ongoing updates and expansions which bring new features such as hunger and farming, competitive dungeons, surface domination, and more. Or you can check out DELVE (a dwarf stronghold variant that started this whole venture) or UMBRA (a sci-fi variant which challenges you with colonising strange alien planets).

Physical Copies can be ordered from https://www.blackwellwriter.com/

In order to download this game you must purchase it at or above the minimum price of $7 USD. You will get access to the following files:

As some other commenters have stated, there is no win condition printed in the text, so as a solution you can just follow what the other games in this series have done: If you get a red joker and the two cards are face cards, you found a portal to your old fortress above ground and you can resume your evil plans. As a symbol of power, the fortress reduces the mutiny threshold of all units by 4, and the treasures you had in your fortress are worth 500 trade goods if you decide to keep playing. For tryhards, if you reach floor 30, you break out onto the surface. Now with the ability to tunnel anywhere and invade the heart of any surface city at the drop of a hat, you quickly take over the world.

Really wish I had the 10 dollars to buy the bundle or enough for this game, living in a third world country and being poor isn't fun xD...can't complain much though, life still is beautiful ♡

This game is hard. I constantly found myself starving for resources and facing challenges too great to handle with my meager forces. I lost quite early on to a creature of 130 STR, then decided to narrate that that creature was the new dungeon boss and keep playing. Then I threw a bunch of my forces at a 40 STR monster, and, while depleted, ended up drawing a card that allowed adventurers at 60 STR to march in and mop up what was left of my defenses. I wish there was a way to start banking Resources and Trade Goods, but perhaps instead of that I should try again and see if there's a wiser way to spend my starting stuff.

More than anything, I wanted to play a game while drawing a map, so rather than start from the bottom again, I may buy Delve and play it from the opposite end of the sheet of paper I was using.

Will their at some point be community copies of this game. I legit can't afford it

Send me an email at annablackwell1994@gmail[dot]com

I sent an email sorry for taking so long

Me again! I've freed the god of wishes, and I suppose my wish was to become an evil overlord, because that's what I am!

I really like this game as well, a new twist on the DELVE dungeons I was enjoying before. Like DELVE, I've spotted a few errors in the book... Actually, there are a lot more errors in this book. Despite some parts having a lot more details in some areas - I love all these encounters, for example - it really gives the impression this book got a lot less love than its dwarven counterpart.

The first, and biggest problem:

there is no win condition! It implies in the beginning that the goal is to reach the surface. Cool, no problem. But... you can only do so by using  the *optional* rule for Layers. Unlike in DELVE where you can win by drawing Red Joker + face card + face card, there is no other noted win condition thaty I can find anywhere in the book.

Unit Costs for prisoners and club and spade units are "XX". This looks like a placeholder, perhaps "varies" would be better.

The Manor room says that it causes spaces near it to become hovels, and nearby hovels don't count as lairs. Why not just say a manor takes up 3 tiles? Or is there a typo here.

The Rattery room says "20 rats regardless of size" is this the size of the rattery, or the rats? Rat size is affected by some things, I later see, but it would be useful to say "1 or more" in the unit strength.

The option to imprison enemies should also appear under combat, not just under prisons.

The portals section doesn't refer to where a portal comes from. Presumably a discovery?

Thieves' gallery (and portal camp, too) should maybe be under buildings?
Reply
RonarsCorruption2 years ago

Sadly, I have another long list of typos and problems I'm having trying to play  RISE:

- Legendary Find (Q)  says 5 cultsits is 25 STR, but cultists have 2 STR. Are these special cultists, the wrong STR, or meant to be a different unit?
- The Underworld Layer is not fun. Happiness dropping 3 every turn feels like a lot, so I have to spend a lot of resources just keeping up ... for an average of 50 turns. And since the only reliable ways to get happiness is to build rooms, you end up with twenty extra taverns or casinos, which is silly both mechanically and thematically.
- Related, there are so many ways to lose happiness, but only five controllable ways to gain it, all of them built around room construction. It feels like this resource isn't balanced right. I dunno. Perhaps an option opposite "Sacrifice" called "Bribe" which costs <> per unit but raises morale? It would counterbalance the income from thirty casinos to get through the Underworld.
- It would be really useful to have a list of the rooms the same way there was a list of the units. ideally on the same page.
- There aren't very many ways to trigger magic. You can sacrifice a minion (which costs happiness), there are two clubs, and one information result. I've gone seven floors without a single spell.
- Related: Portals are WAY too rare. They feel core to the experience, but if you can only get it by repeated sacrifices and eventually drawing an ace.
- When raiding, I might send one troop of 10 units, and it says I need to check for units that get defeated. Presumably that means the individuals, but in combat it says units/troops. Could use a clarification.
- Given that you will be drawing 10-30 cards at a time for Raids, why are there no rules for drawing jokers? Cause if you draw 30 cards out of a deck even once the odds of getting at least one joker are nearly 50%.
- The Thieves' gallery feels like it's intended to be critical, but is actually only bad. Like sure, realms drawing less cards is good, and razing them is fun and thematic, but collecting items means you can't raid any more and that's really bad, and that's all that happens. But if you only build a few galleries, you never raze the realm, and can just get huge amounts of resources very fast.

So, I've played with raids a bit now and... they lose engagement really quickly. Once you have a few good units (i.e. Ferals), you can raid almost anywhere, and once you capture and convert one good realm unit, it's a snowball of victory. A single Inmate or Monstrosity is 10 cards on its own. Add nine ferals and you're drawing 20+ cards every turn, and amassing huge amounts of treasure.

Also, for all the things like adventurers, heroes, legendary finds, good and bad magic... you don't actually find them. Like, there are three ways to get good magic, one way to get an adventuring party, two to get bad magic.

All in all, it's got a lot more flavor, but a lot less depth than DELVE.

I wish their were community copies 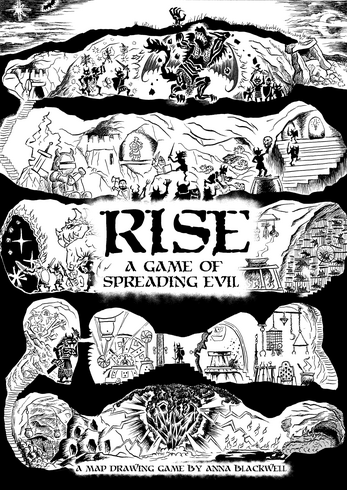